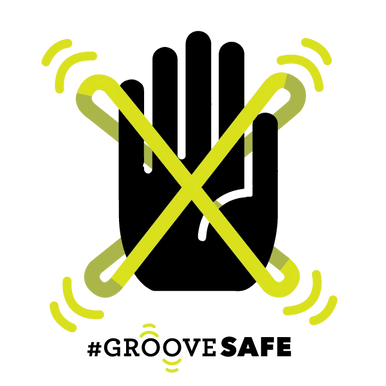 Our initial goal at GrooveSafe is to be present in the live music scene across all genres. We believe a change in behavior will start with awareness of the problem.  We strive to keep the conversation going and build a culture with emphasis on consent.

Our long term goals include educating people on how to respond to assault, how to take action as an active bystander, tips on staying safe and eventually offering support and resources to survivors.

We want our logo to represent a silent message of a safe space- standing against the unwanted touching and sexual assault against any gender, by any gender, at any live music event.  Self expression is not an invitation - help us spread the word.

GrooveSafe is a movement within the musical community to bring awareness about unwanted touching and sexual assault at concerts. #GrooveSafe #ALLGENDERSALLGENRES

Yes, it happens and it’s terrible. For years, going to concerts was my happy place. There was just one element of the environment that was always uncomfortable. From time to time, I would get groped or grinded on. I spent many shows wondering why people thought it was okay to touch other people without permission. It ruined entire nights when I was so put off, so violated, that I had to excuse myself from the show.

I began to talk about it, mostly with friends and in online groups. I knew I had to be brave and talk about this issue as much as I could.

In the fall of 2016, there was an incident at a Phish show in Las Vegas where a man’s girlfriend was groped and it created a loud online discussion, as it should have. This prompted me to extend the conversation outside of my trusted circles. With a background in Psychology, human behavior fascinated me but I was also sick of people hurting others.

I created a thread in a large internet Phish forum and the response was overwhelming. There was a variety of responses ranging from “I had NO idea this was happening” to “Thank you for addressing this, I didn’t realize I was assaulted until this conversation”.

I learned so much from that research and those testimonials, not only how frequently this was happening but it happens while sober, in every music scene and to people of all genders. I knew I needed to start a movement. Body safety is something that is taught in kindergarten and keeping your hands to yourself is expected to have been learned long ago. There are movements and campaigns that stress the importance of consent in many areas of our culture. Why should the music scene be any different?

We now partner with bands,  venues, promoters and groups to spread our message.

The movement starts with awareness which will lead to changing behavior as well as protecting each other. Keep talking about this and look out for one another. This is a mission within the community, for the whole community, to better the community.

We look forward to putting an end to sexual assaults and unwanted touching at concerts.

Your generous donation will fund our mission.

What can we do together?